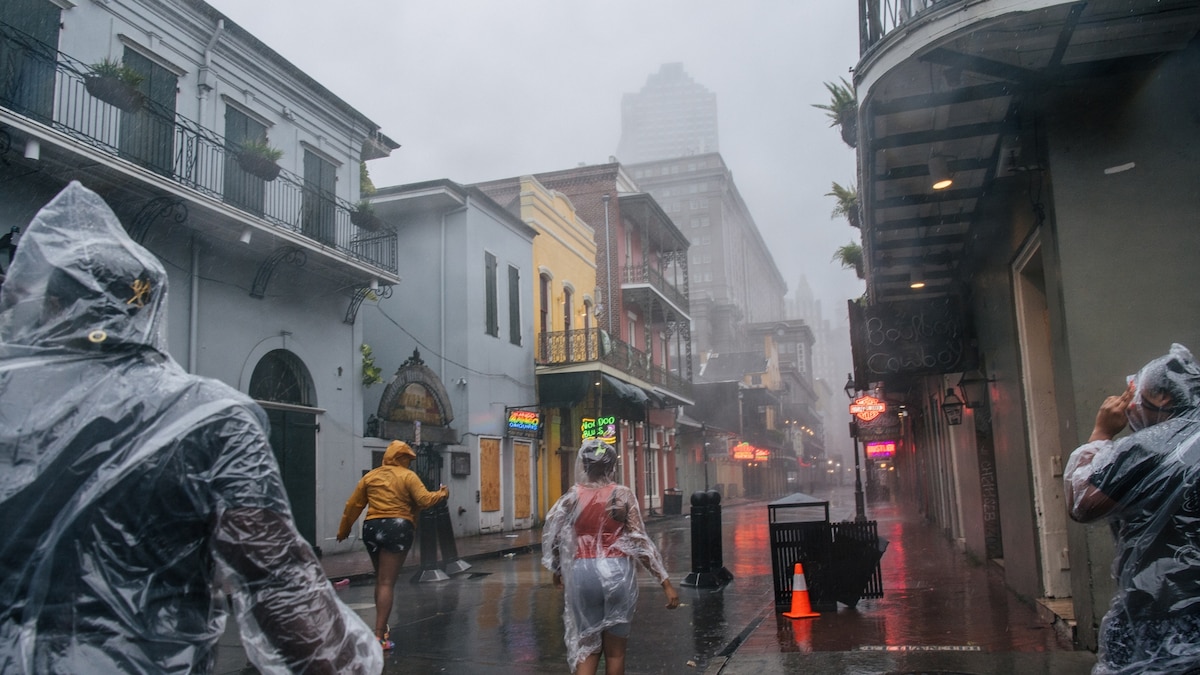 From punishing heat in North America to record-breaking floods in Europe and Asia, this year’s weather showed us what it looks like to live in a world that has warmed by 2 degrees Fahrenheit (1.1 degrees Celsius) over the past century.

Extreme weather is already taking homes, businesses, and lives. Canada’s recent floods may be the most expensive in the country’s history, potentially costing an estimated $7.5 billion. The 18 weather disasters that hit the United States in 2021 together cost more than $100 billion, according to the most recent estimates.

In August, Wehner and other scientists on the Intergovernmental Panel on Climate Change published a report indicating they were now more confident than ever that climate change is influencing the world’s worst weather events, including these five.

On June 27, Portland residents fill the Oregon Convention Center, which became a temporary cooling center when a record-breaking heat wave struck the Pacific Northwest. In regions unaccustomed to intense heat, many homes lack air conditioning, leaving those inside vulnerable to heat-related illnesses.
Please be respectful of copyright. Unauthorized use is prohibited.

The intense heat resulted from a weather phenomenon called a heat dome, in which an area of high pressure acts like a lid on a pot and keeps heat trapped over a specific region.

Research on the heatwave found that its intensity would have been “virtually impossible” without the planet-warming greenhouse gases that have been emitted into the atmosphere over the past 120 years. As a result of the heat, hundreds of people died in the region. One study published this summer concluded that more than a third of all heat-related deaths worldwide could be blamed on climate change. And it’s those already suffering the most—from lower incomes, poor health, or old age—who are most harmed by heat.

Plants and animals struggle to cope with extreme heat, too. In the Pacific Northwest, millions of marine animals died, as did many on land. Farmers saw berries roast on their vines.

Megadrought in the West

In Lake Oroville, California, houseboats sit in a narrow section of water in the depleted lake. A “mega drought” has been gripping the West since 2000, and this year, dry conditions triggered water restrictions for farmers served by the Colorado River.
Please be respectful of copyright. Unauthorized use is prohibited.

In August, the U.S. declared a water shortage on the Colorado River—a first for the waterway. Lake Mead, one of the river’s most important reservoirs, dropped to historically low levels. While the declaration triggered water cuts to farmers in Arizona and parts of Nevada, with some 40 million people at least partially dependent on the river for water, future droughts could prompt more widespread water reductions.

A “megadrought” has been gripping the West since 2000. While the region would have likely experienced drought regardless of human influence, scientists say climate change is making it worse than it’s been in over 1,000 years.

Drought can create dangerous feedback loops. As the air warms, it sucks more moisture out of rivers, lakes, plants, and even the soil, which can in turn make the ground even hotter and drier.

And while the drought in the western U.S. was historic, climate change is likely to worsen drought around the world, with historically arid regions in Africa and the Middle East hit hardest.

On August 30, firefighters with the Santa Clara fire unit try to protect structures on the Echo Summit, a mountainous part of California east of Sacramento. Intense heat and dried-out underbrush create conditions for larger, more frequent wildfires.
Please be respectful of copyright. Unauthorized use is prohibited.

This year, California’s Dixie fire was the second largest in the state’s history. It burned half a million acres and some 400 homes, contributing to a string of busy fire seasons that have plagued the West. North America wasn’t alone. Large wildfires broke out in Turkey, Greece—and perhaps most surprisingly—Siberian Russia.

When extreme heat and drought coincide, zapping the soil’s moisture and creating fields of dry vegetation, it only takes a small spark to ignite a deadly blaze. As climate change worsens heat and drought, it creates the conditions for larger and more frequent fires. In some parts of the West fire season now lasts all year.

Not only did the year’s wildfires immediately threaten homes and businesses, they also produced unhealthy air pollution and threatened endangered species, including California’s famed sequoia trees.

On July 16, the German region of North Rhine-Westphalia was engulfed by floodwaters resulting from extreme rainfall.
Please be respectful of copyright. Unauthorized use is prohibited.

Canada, the U.S., Germany, China—extreme rainfall and the floods they triggered plagued the globe this year. In each of these places, the volume of precipitation was historic.

In British Columbia, 20 towns set rainfall records; Nashville saw its fourth wettest day ever; more rain fell on Central Park in a single hour than ever before in that timespan; German towns were inundated with more rain in two days than in a normal month; one day of rain in Zhengzhou, China, exceeded a year’s worth of average annual precipitation.

More intense rainstorms result from warming temperatures; for every 1.8°F (1°C) rise, the atmosphere can hold 7 percent more moisture. With more water at their disposal, storms have the potential to dump enough rain to cause flooding.

Many of this year’s floods brought to light how population centers and transit routes were engineered for a climate that may not prevail for much longer. For example, goods going to and from Asia stalled at Vancouver’s port, waylaid by floods. In major cities, underground train tunnels were swamped and streets turned into rivers.

On August 29, a group of people walk through New Orleans’ French District during Hurricane Ida. The Category 4 storm struck with winds of 150 mph. It was the strongest storm to hit Louisiana since the 1850s, and it caused widespread destruction as it moved east, eventually flooding New York City.
Please be respectful of copyright. Unauthorized use is prohibited.

Extreme rain is one major way climate change is making hurricanes worse. Hurricane Harvey, which struck Houston in 2017, was one of the most extreme examples of this. The storm dumped 60 inches of rain in some parts of Texas.

But it was Hurricane Ida that exemplified another dangerous trait of climate change-charged hurricanes: rapid intensification. This occurs when a hurricane’s winds increase by at least 35 mph in under 24 hours. Ida far surpassed that rate, growing by about 60 miles per hour in a day, from a Category 1 storm to a Category 4, its top winds clocking at 150 mph.

One recently published study found a possible link between the September Texas freeze and climate change, suggesting that the barrier between cold Arctic air and warm tropical air is becoming more unstable and that the polar vortex—the flow of air moving through the stratosphere—is becoming increasingly likely to deliver intense winter storms.

As the world’s weather becomes more tumultuous, the public may be starting to perceive climate change differently.

“The hard truth is that most American communities will almost certainly experience more and worse climatic events in the decades to come,” he says.