About one in 25 Australian homes are at high risk of becoming effectively uninsurable by 2030, according to a new Climate Council report based on analysis by a climate risk assessment group.

That number rises to more than one in 10 homes for some of the most affected regions, including parts of Brisbane, the Gold Coast, Greater Shepparton, Ballina and Port Adelaide.

The report authors warn that Australia is heading for an “insurability crisis” as climate change increases the risk of worse weather extremes, resulting in “skyrocketing” insurance premiums.

“We’re talking about half a million properties — it’s not insignificant,” said Nicki Hutley, report co-author and economist with the Climate Council.

“This has implications for every single taxpayer in Australia.”

Of the top 10 electorates to be impacted, most (80 per cent) are due to the increasing insurance risk posed by riverine flooding, according to the “Uninsurable Nation” report, which was released today.

When a property becomes “effectively uninsurable”, it means the insurance premiums are so high as to be unaffordable to the average home owner, according to Karl Mallon from Climate Valuation, who provided the Climate Council with the data.

Once there is more than a 1 per cent chance in any given year of a property incurring major damage from an extreme weather event, that’s when premiums start to escalate, Dr Mallon said.

“Essentially, we stand by the view that once you get above these levels, there will be many people who cannot afford this insurance.” 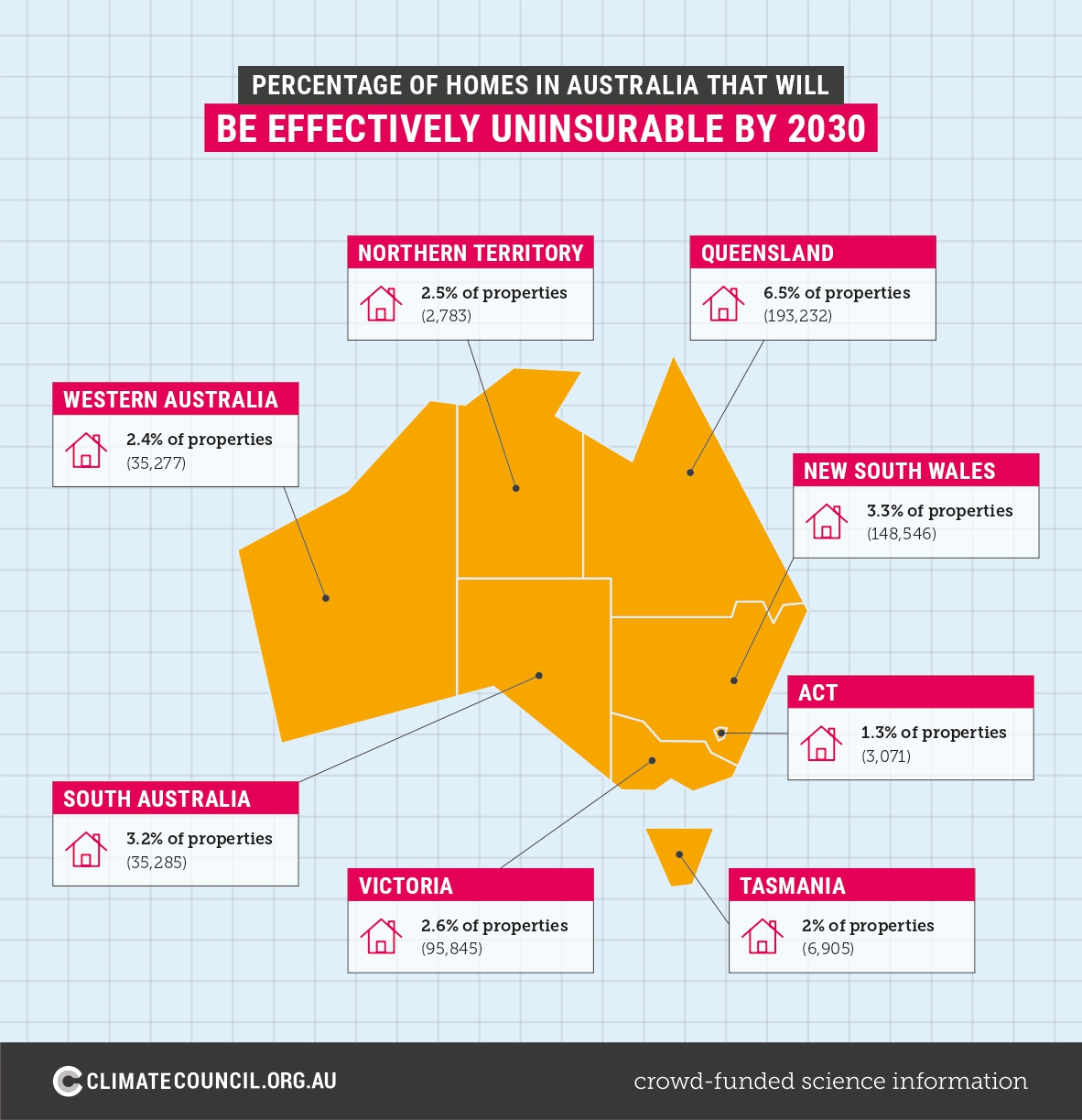 Queensland is projected to be the hardest-hit state, with up to 193,000 properties (6.5 per cent of the total number) deemed to be at high risk of uninsurability by 2030, followed by New South Wales with more than 148,000 properties.

The findings were based on a business-as-usual, high emissions outlook for climate change. Dr Mallon said what banks and insurance companies choose to base their premiums on varies, but they’re required to factor in business-as-usual forecasts.

“The kind of guidance coming out from the governing regulatory bodies in Australia and around the world, they almost all insist that every company have a view on the high emissions scenarios,” he said.

“Unfortunately, that’s where we’re tracking, is along those pathways.”

At this stage, the high emissions scenario is looking likely through to 2030, Ms Hutley said.

“What we call the high emissions, worst-case scenario is the path we’re currently on with no pathway adjustments,” she said.

“This is actually what we’re facing down if nothing happens [and] with the 2030 scenario, most of that [warming] is already baked in.”

The report also includes an interactive map with moderate and best-case emissions scenarios, where users can explore outcomes through to 2100.

In the federal electorate of Nicholls in Victoria, which includes Shepparton, Moira, Campaspe, Mitchell and parts of Strathbogie Shire, as many as one in four houses are predicted to move into the insurance “high risk” category by 2030.

Strathbogie mayor Laura Binks said her community was “already living the reality of climate change right now”, but she was still surprised to see how at-risk the Strathbogie Shire could become. 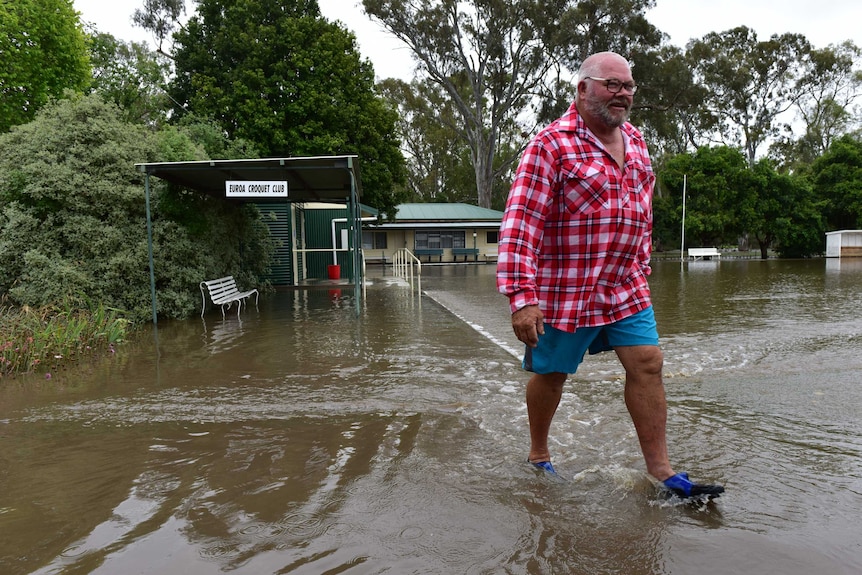 In 2021, Strathbogie became the 100th council in Australia to declare a climate emergency. Councillor Binks said this report had reinforced the need to get emissions down.

“We’d absolutely welcome meaningful [climate] action at the state and federal level that the scientists are telling us we have to take,” she said.

Councillor Binks said there were already a number of climate-positive projects in the Strathbogie Shire, including a microgrid at Euroa and carbon-neutral wineries, but that building resilience against future extreme weather events posed a bigger challenge.

“It’s certainly a part of the work that our operations and engineering teams are doing, is looking at ways we can build resilience,” she said.

“[But] the challenge we have at Strathbogie is we have a large area but a fairly small rate base.” 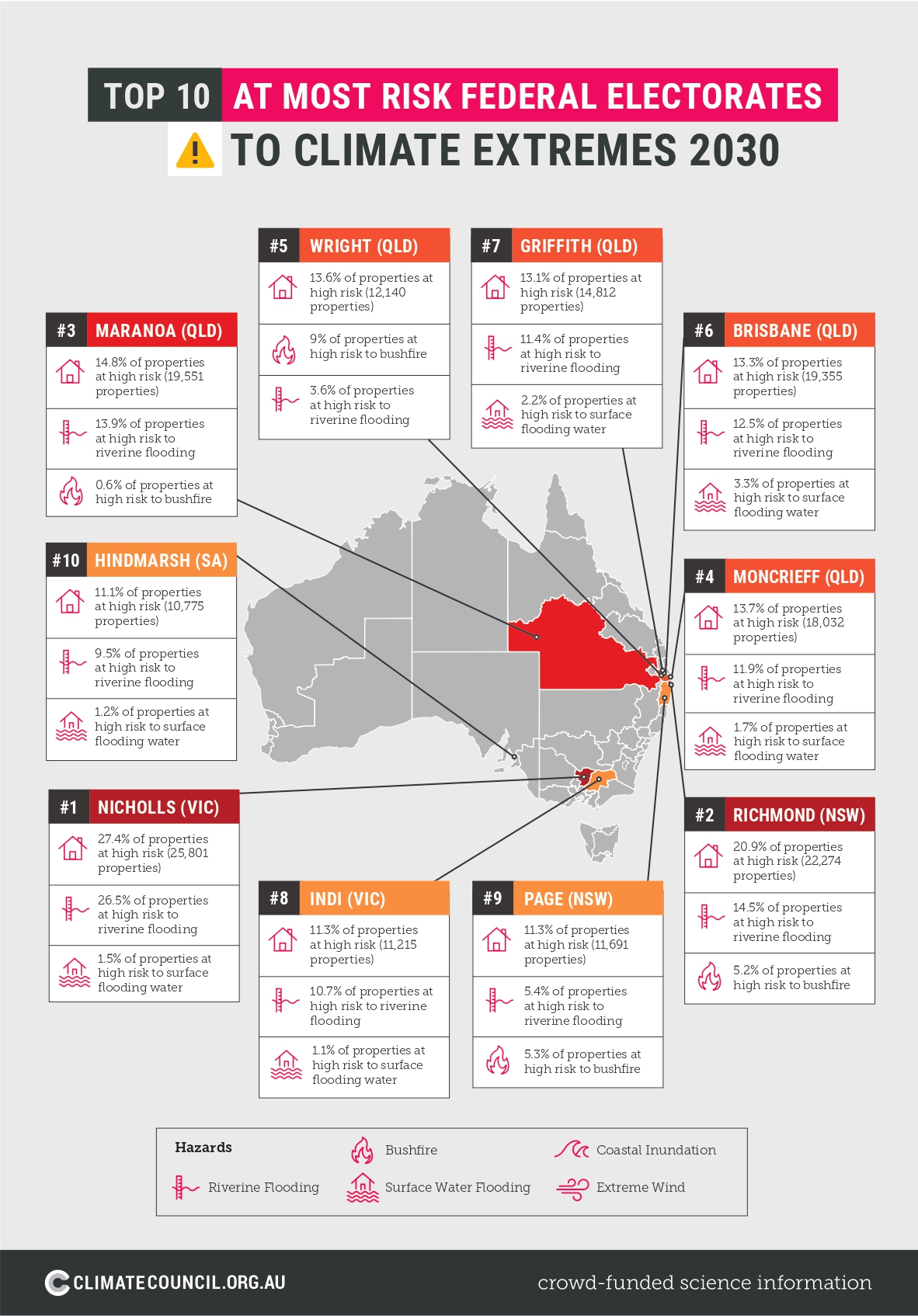 That means the council can’t generate the revenue locally to invest in expensive infrastructure projects.

“What we’d love to see is more meaningful support and partnering from state and federal governments,” Councillor Binks said.

“We don’t want to see rural and regional places get left behind.”

Next five years ‘not going to be a smooth curve’

Climate Valuation calculated the data used in the report with a program that input variables including flood mapping, elevation, and forest cover, combined with global climate models, to assess the “upper range” of risks posed to every address in Australia.

Assuming an average house cost of $314,000 (it was $320,000 last year according to the ABS), they then calculated what is called the MVAR, or maximum value at risk, for each property.

Houses that scored an MVAR of 1 per cent, which means that extreme weather was likely to cost them on average 1 per cent of the value of their property each year — $3,140 based on the assumed average house cost — were deemed to be at “high risk” of becoming effectively uninsurable. 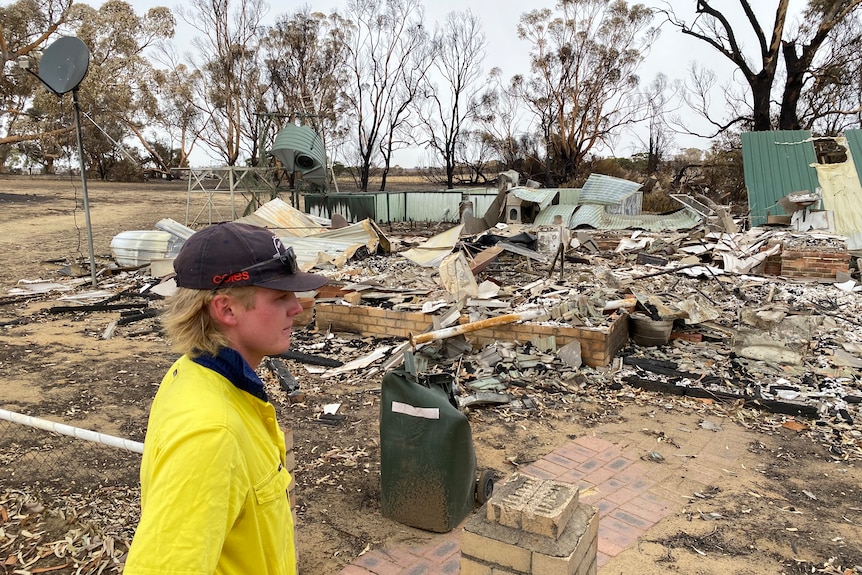 Because extreme weather events happen with a degree of random probability, jumps in insurance premiums can be difficult to predict.

However, Dr Mallon says that, in general, insurance companies and banks have been underestimating the growing risk of climate change.

“Unfortunately, we think it’s not going to be a smooth curve from here over the next five years,” he said.

“We think there’s going to be some bumpy corrections.”

What people need to understand, he said, is that while a 1 or 2 per cent chance of an extreme weather event might sound low to the property owner, to an insurer, that could be an unacceptable risk and cause for boosting premiums.

“Everyone is saying, ‘What’s the statistical probability of an extreme weather event?'” Dr Mallon said.

“If I was a home owner, I’m more worried about what the insurers and banks are going to do, than what is the possibility of an event coming through.”

A spokesperson for the Insurance Council of Australia says climate change is “worsening extreme weather events, which has implications for affordability and availability of insurance”.

“At present there is no area of Australia that is uninsurable, although there are some locations where there are clearly affordability and availability concerns,” the spokesperson said.

“Insurance [assesses] risk, and that means that for those in flood-prone or cyclone-prone locations, cover can be costly.

“In late February, ICA released our election policy document, Building a More Resilient Australia, which states that the next Federal Government must increase its investment to $200 million a year and this must be matched by the states and territories, in line with a 2014 Productivity Commission recommendation.”

The policy document outlines areas of spending the council deems to be priorities, including funding flood levees for regional towns.

Space to play or pause, M to mute, left and right arrows to seek, up and down arrows for volume.
CampaspeClimate Councilexpensive infrastructurefederal governmentGold CoastInsurance Council of AustraliamayorPort AdelaideQueenslandVictoria
Privacy & Cookies: This site uses cookies. By continuing to use this website, you agree to their use.
To find out more, including how to control cookies, see here: Cookie Policy