Plans to build a massive solar energy project would result in significant reductions in greenhouse gas emissions in northern Australia but could also cause adverse effects, an environmental impact assessment (EIS) has found.

Sun Cable intends to spend more than $30 billion on its Australia-Asia PowerLink, which would harness solar energy in the Northern Territory and transmit the power to Singapore via undersea cables.

The company said it would be the world’s largest solar energy infrastructure project.

The project would have several “potentially transformational” positive impacts, including a 10 per cent reduction in the NT’s greenhouse gas emissions, according to the EIS.

It would also have the capacity to supply up to 15 per cent of Singapore’s energy needs.

Sun Cable hopes to begin construction in 2024 and expects the first phase to generate 1,750 jobs, as well as another 350 ongoing jobs across the project’s 70-year lifespan.

“The lodgement of the EIS to the NT [Environment Protection Authority] is a significant milestone for the AAPowerLink,” Sun Cable chief executive David Griffin said. 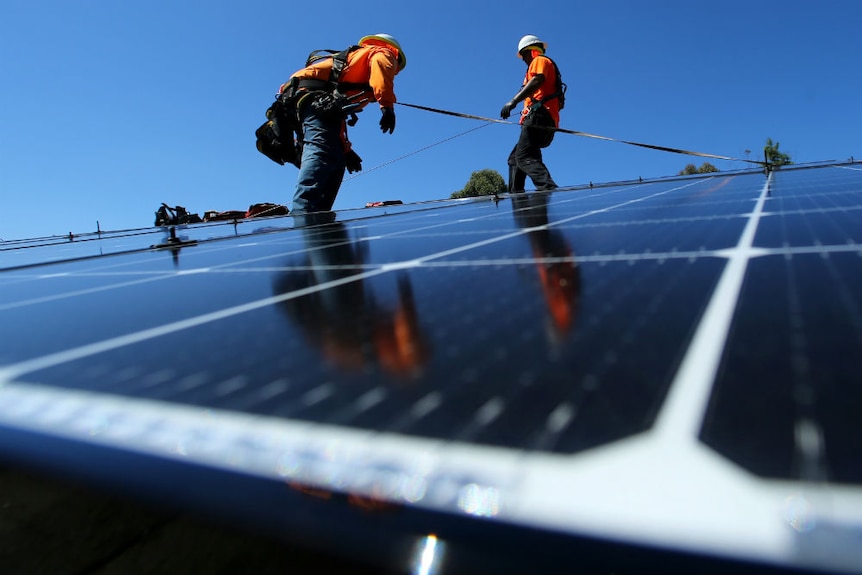 The project includes several major elements, including a huge “solar precinct” near Elliott in the NT’s Barkly region, where photovoltaic solar arrays would be installed on 12,000 hectares of land to generate up to 20 gigawatts of power, some of which would be stored in batteries.

About 3.2 gigawatts of renewable energy would then be transmitted along 788 kilometres of overhead transmission lines, largely following the railway corridor to Darwin.

A converter site would be set up on the coastline at Murrumujuk, 31 kilometres east of Darwin, where about 800 megawatts of power would be channelled into Darwin’s electricity supply — almost double the region’s current demand.

The remaining power would then be transferred to undersea cables at the nearby Gunn Point beach where a subsea system involving three separate cables would run 4,200 kilometres to a converter station in Singapore.

The EIS identified a range of potentially negative environmental impacts, which were categorised as minor to moderate risks.

They included possible impacts on vulnerable plant species, including Darwin Cycads, near the converter site at Murrumujuk and nearby Gunn Point.

Almost seven per cent of another threatened plant species known as Typhonium praetermissum would also be removed from the area.

However, the EIS said the project was unlikely to affect fauna, including the Greater Bilby, the Yellow-spotted Monitor and eight threatened species of migratory shorebirds.

It noted the undersea cables would pass through areas where several threatened and migratory marine animals occur, including turtles, dugongs, pygmy blue whales and whale sharks.

But it found any impacts associated with extra noise and light from vessels, or electromagnetic fields from the cables, were minor.

Sun Cable said it was conducting further surveys of threatened species to address any knowledge gaps.

The EIS also noted that weeds could spread as a result of land clearing in the project areas. Among several other potentially negative impacts, Sun Cable flagged the prospect of reduced housing affordability and availability due to the influx of a large workforce.

It also noted the possibility of increased COVID-19 outbreaks as a result of transient workers.

The company said it was working closely with traditional owners to negotiate Indigenous Land Use Agreements.

It said it also required approvals from the NT’s Aboriginal Areas Protection Authority to ensure sacred sites would not be impacted.

Sun Cable said the 800 megawatts of renewable energy it hopes to provide to the Darwin region “will unlock new green industries including hydrogen and manufacturing.” Sun Cable is yet to secure a contract to supply renewable energy to Singapore.

However, a spokesperson said the response to an expression of interest late last year exceeded its plan to supply 1.75 gigawatts to the region.

“Sun Cable is progressing commercial conversations with interested off-takers, with a view to finalise agreements prior to financial close (in 2023),” they said.

In March, the company announced it had secured $210 million from existing shareholders, including Australian billionaires Mike Cannon-Brookes and Andrew Forrest, to fund the development of the project.

Last September, Sun Cable said it had received support from the Indonesian government for the project’s electricity cables to travel through its waters.

The EIS is open for public submissions until July 15.