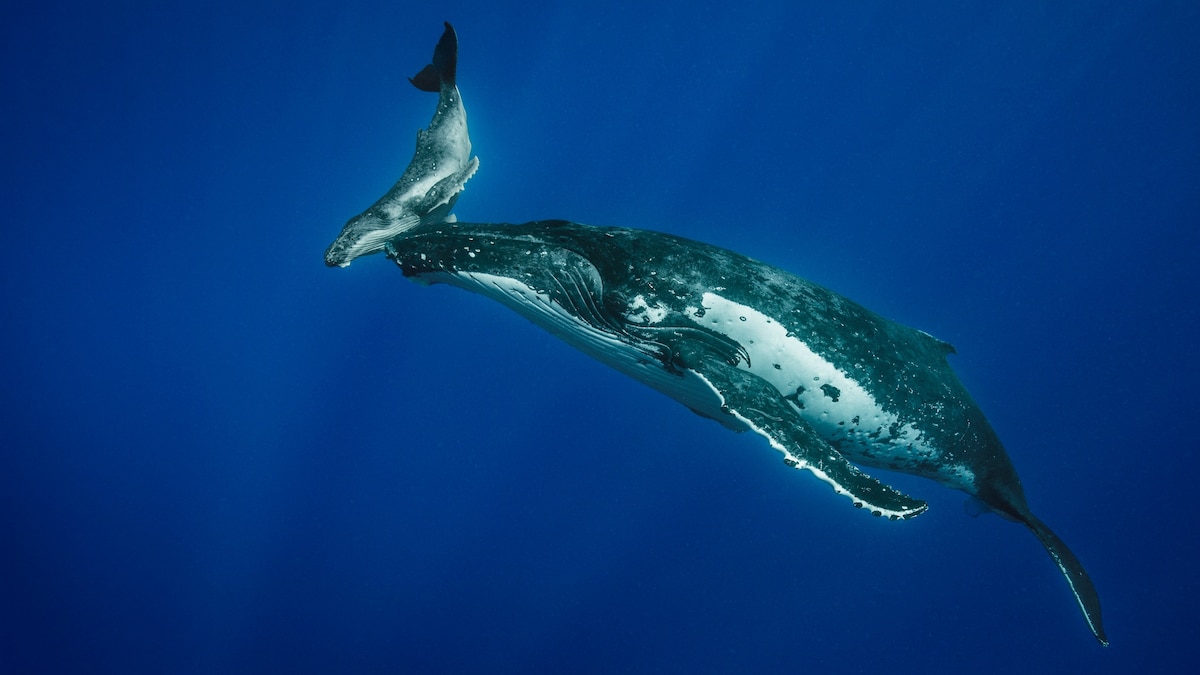 After largely recovering from decades of overhunting, one of the most iconic whale species may be at risk from climate change, as warming waters could force it away from its traditional breeding grounds in the tropics.

According to a new study , projected sea surface temperature increases mean that many humpback whale breeding areas would no longer be within their historic temperature range by century’s end. Combined with warming of their feeding grounds, as well as the impacts from other human activities, such changes may mean that, even after years of recovery, humpbacks’ future remains far from secure.

Perhaps the most familiar of the great whales, with long pectoral fins and a penchant for leaping clear of the water—a behavior known as breaching—humpbacks are also famed for their lengthy, complex, and haunting songs. Because they swim primarily in coastal waters, humpbacks were easy and early prey for commercial whalers, who began targeting them in the 16th century and killed roughly 250,000 in the 20th century alone, reducing the global population to a few thousand. Even as some other whale populations have recovered slowly or not at all, humpbacks have rebounded strongly throughout their range.

For example, notes Philip Clapham, formerly of NOAA’s Northwest Fisheries Science Center and now Senior Scientist at SeaStar Scientific, the populations that migrate from the Antarctic along the coasts of eastern and western Australia “may well have been reduced to a few hundred animals by the time the Russians, in what was then the Soviet Union, finished illegally plundering them in the 1960s. But today, they number “in the tens of thousands, with continued strong growth.” He adds that “even South Georgia (Island)—where Antarctic whaling began in 1904 and where humpbacks were pretty much wiped out by 1915—has seen whales returning in significant numbers in recent years after decades of no sightings.”

A humpback whale feasts on fish that have congregated in the warm waters of Monterey Bay, California.
Please be respectful of copyright. Unauthorized use is prohibited.

In summer, humpbacks feed in cold waters in high latitudes, such as off Alaska, Antarctica, Iceland, Norway, and the eastern seaboard of Canada and the United States, migrating annually to warmer waters to breed. Exactly why they migrate is not clear, although theories range from avoiding predatory killer whales—which occur in far greater abundance in the cold feeding grounds—to rejuvenating their skin.

Another theory is that the tropical waters enable newborn calves to channel their energies into something other than keeping warm. “It isn’t as if a calf will die if it’s born in cold water, but in warm water it can channel more energy into growth,” explains Clapham. That the warm water is itself a major factor is indicated by the fact that the sea surface temperature in every humpback breeding area worldwide is between approximately 21 and 28 degrees Celsius (70 and 82 degrees Fahrenheit).

The humpbacks’ presence in these breeding grounds has led to a huge, global whale-watching industry. In Hawaii, where approximately 10,000 humpbacks travel each year from their feeding areas off Alaska, the industry pumps more than $11 million each year into the state’s economy.

However, according to the new study, all of this—humpbacks’ recovery, their breeding ground migrations, the whale-watching industry—may be at risk from climate change. In the study, Hannah von Hammerstein and Renee Setter, PhD students at the University of Hawai’i at Manoa’s Department of Geography and Environment, worked with whale experts from the university and the Pacific Whale Foundation to project sea surface temperature increases onto humpback whale breeding areas.

They found that, under a “middle-of-the-road” scenario for climate change—in which economic growth continues at historical levels but is combined with limited efforts to reduce warming—36 percent of Northern Hemisphere humpback breeding areas, and 38 percent of those in the Southern Hemisphere, would consistently experience temperatures at or above the upper limit of 82 degrees Fahrenheit by the end of the century. However, under a scenario in which fossil fuel emissions continue apace, those figures rise to 64 percent in the Northern Hemisphere and 69 percent south of the equator.

The results were a surprise to the researchers.

A humpback whale displays its fluke before diving in the Gerlache Strait, Antarctica.
Please be respectful of copyright. Unauthorized use is prohibited.

With so little known definitively about why humpbacks select specific breeding grounds in the first place, it is difficult to ascertain the precise impacts of such a development. While it may theoretically be possible for the whales to simply select new places to breed and calve, study co-author Stephanie Stack argues that it isn’t quite that simple.

“We don’t know where they’d go if this habitat was unavailable to them,” explains Stack, chief biologist for the Pacific Whale Foundation. “Habitat worldwide is becoming degraded, so we just don’t know how they will react at all.” Furthermore, she notes, in some locations—notably Hawaii, where the nearest landmasses are California, which is more than 2,000 miles away, and Japan, nearly 4,000 miles distant—there simply are no nearby areas to which they could obviously and easily divert.

It is important to note that any changes to the breeding grounds would not be happening in isolation. Humpbacks, like other whales, are facing cumulative threats from ship strikes, fisheries, underwater noise, and other human activities. If the temperature is increasing in their breeding areas, it will be doing so in their feeding grounds, as well, with potentially even more severe impacts.

“Although the temperature threshold won’t be above their preferred temperature in their feeding grounds, we’re already seeing changes there because of ocean warming,” says Stack. Southeast Alaska, for example, has experienced a series of warm-water events in recent years; one of them, a pool of warm water that became known as “the Blob,” stretched as far south as Mexico and upended the marine food chain, shutting down fisheries, devastating salmon numbers, and resulting in dead, dying, and starving marine mammals.

“Humpback whale sightings in Hawaii and southeast Alaska dropped for a few years afterward, and to this day have not recovered to the numbers beforehand,” says Stack. “We don’t know if whales died off as a result of that or if they started going to different areas where we aren’t looking for them, or maybe a combination of those things.”

The prospect of such changes increasing in frequency and intensity and spreading to affect breeding grounds is, acknowledges von Hammerstein, a “daunting” one. “But I don’t purely see it as negative because the results also show that by implementing mitigation measures and reducing emissions, so much can be won,” she says.

To this end, the study’s authors recommend increased protection for humpback breeding grounds, to provide extra resilience in the face of climate threats, and to enable further study of how and why the whales use those areas.

“Humpbacks have been celebrated as a conservation success story, and rightfully so,” says Stack. “I think it’s our responsibility now to maintain that trend and do what we can to reduce additional stressors that are happening in the ocean. Our job is not over.”