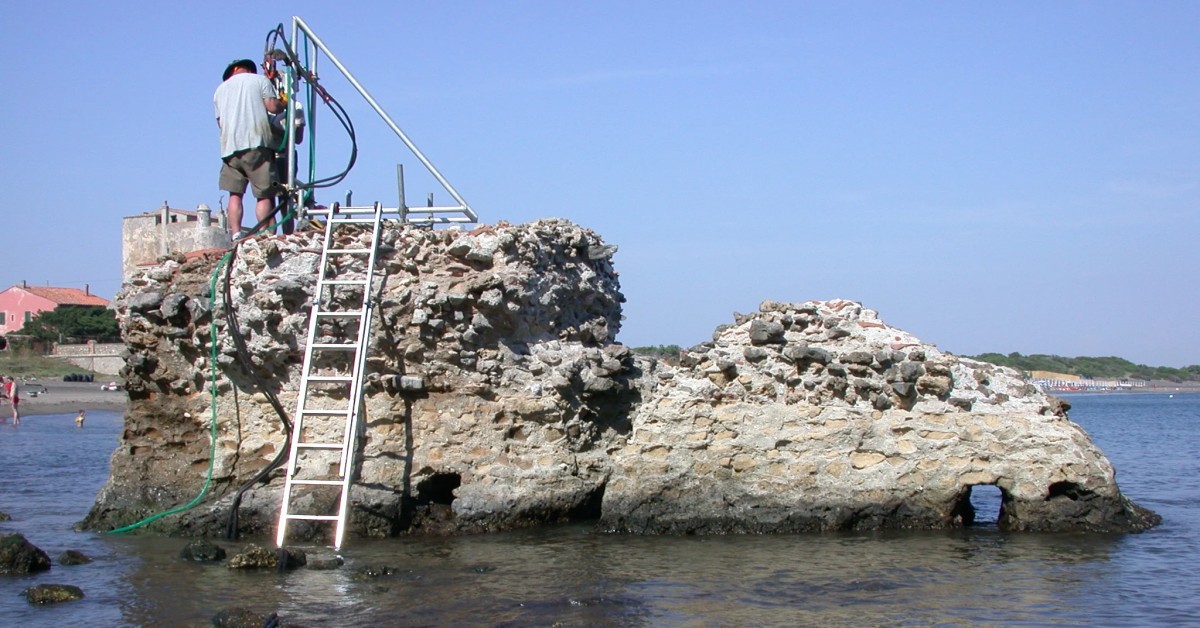 Modern concrete, including its vital ingredient Portland cement, is a major source of greenhouse gas emissions. But it could all change with a new discovery.

Our obsession with concrete accounts for around 5 percent of human-induced emissions. A third of the damage is done by the heat needed to fire the kilns in which the cement is made, while half comes from carbon dioxide released when limestone (CaCO3) is heated. But ancient Romans did it in a different way that was much more environmentally friendly. According to new research led by Professor Marie Jackson of the University of Utah, their process reacted the lime with carbon dioxide in seawater, actually reducing its concentration.

But that isn’t the only reason why the Roman process was superior to ours. The resulting product was (is) also much more long-lasting, as demonstrated by the survival of many 2000-year-old or so roads and buildings that have survived even in earthquake zones. But how did they do it?

In American Mineralogist, Jackson reveals that the structural strength of Roman concrete was provided by crystals of a layered material called “aluminous tobermorite”. The same crystals are present when rocks are forming, for example when volcanic eruptions produce islands. However, these processes were thought to require high temperatures.

“No one has produced tobermorite at 20º Celsius,” Jackson said in a statement. “Oh – except the Romans!”

Roman concrete is known to have been composed of lime (CaO) volcanic ash, and seawater. Now the researchers mapped samples taken from ancient Roman concrete using an electron microscope, and then drilled down to an extremely high resolution with X-ray microdiffraction and Raman spectroscopy. Using these advanced techniques, they could identify all the mineral grains forming in the ancient concrete over centuries.

“We can go into the tiny natural laboratories in the concrete, map the minerals that are present, the succession of the crystals that occur, and their crystallographic properties,” says Jackson.

“It’s been astounding what we’ve been able to find.”

As it turns out, aluminous tobermorite and a related mineral called phillipsite actually grow in the concrete thanks to the sea water sloshing around it, slowly dissolving the volcanic ash inside. This gives space to developing a reinforced structure from these interlocking crystals.

“The Romans created a rock-like concrete that thrives in open chemical exchange with seawater,” Jackson said.

That is exactly the opposite of what happens in modern concrete, which erodes as saltwater washes away the compounds that hold the material together, including the steel reinforcements.

Making concrete the way Roman way would be a blessing to the modern building industry, especially when it comes to constructing structures constantly exposed to seawater. Since the Romans weren’t too advanced in the area of chemistry, it is thought that they discovered the formula by watching volcanic ash turn to stone upon being exposed to seawater.

But unfortunately, the actual formula was lost sometime after Rome fell to less technologically developed invaders, so the only way to recreate the ancient material would be to reverse-engineer it based on our knowledge about its chemical properties. And Jackson’s work to identify its precise contents could help us do just that.

Of course, since can we cannot access the right volcanic ingredients everywhere, it’s not like we can replace all the world’s cement with the historical stuff just like that.

“Romans were fortunate in the type of rock they had to work with,” Jackson said. “We don’t have those rocks in a lot of the world, so there would have to be substitutions made.”

But if Jackson and her colleagues can find out the recipe, marine engineers could eventually get hold of a material that doesn’t require steel reinforcements, can last for centuries, and makes fewer carbon emissions.

So let’s hope they will eventually get there.